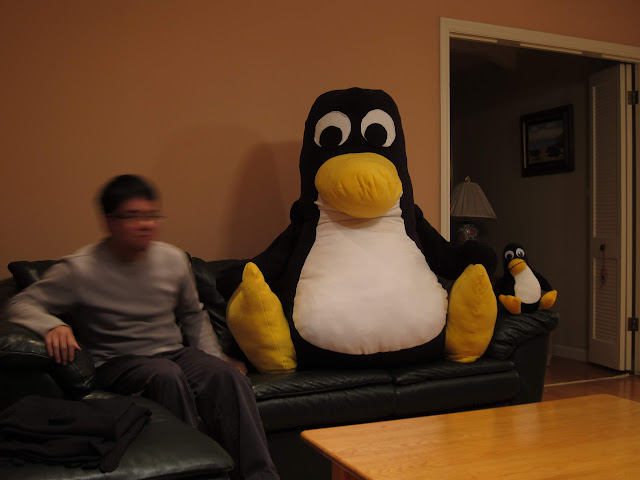 Encouraged by our satisfactory completion of plush Tux penguins from a few months ago, we decided to make a Giant Plush Tux using the same pattern (from free-penguin.org), but scaled up by a factor of 4. 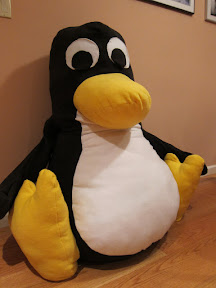 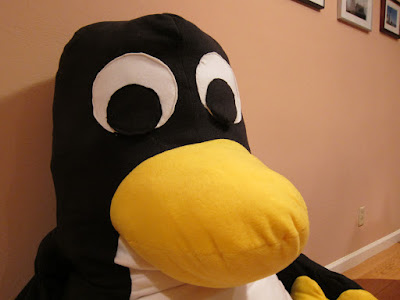 We, ahem, reappropriated stuffing from other stuffed animals, so we only needed to buy fleece for the exterior. The total cost of consumables was about $60.

The making of Giant Tux 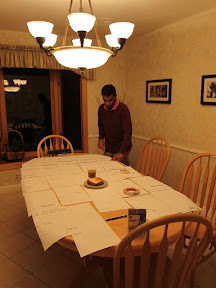 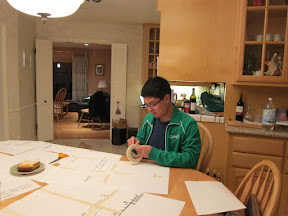 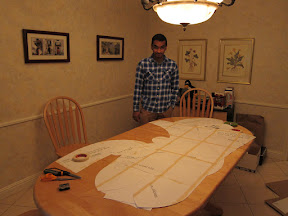 We did some trivial rearrangement of the original pattern pieces on the computer, and we printed the patterns at 4x scale onto 48 pages of US legal-sized paper. The pages are then taped together and the patterns are cut. 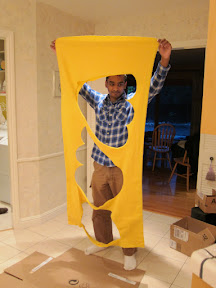 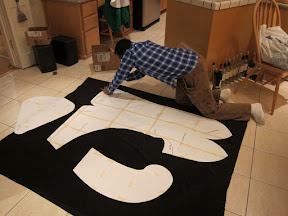 The pattern pieces are used to cut the fabric. 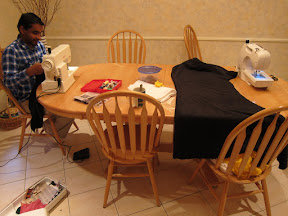 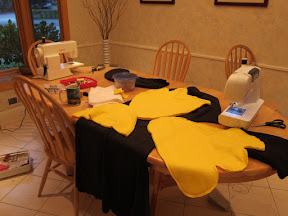 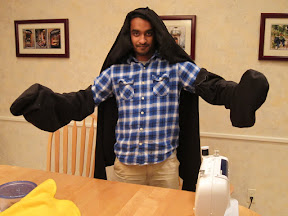 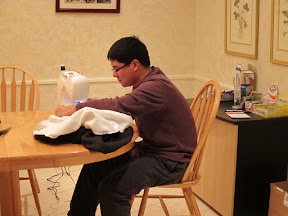 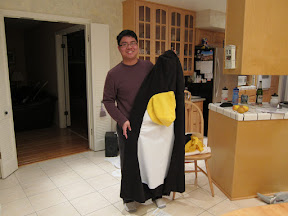 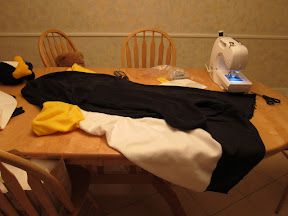 The back, beak, and bib are pinned and then sewn together. The wings and feet are also sewn together but kept separate from the rest of the body for now. 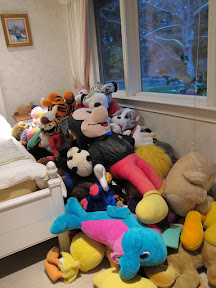 Some unlucky stuffed animals (special thanks to Ed Lee) await their demise. 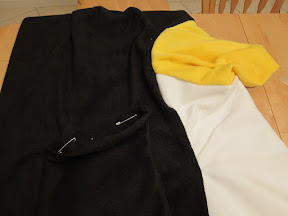 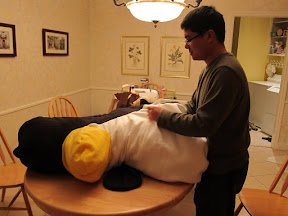 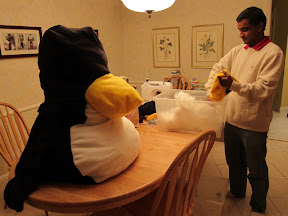 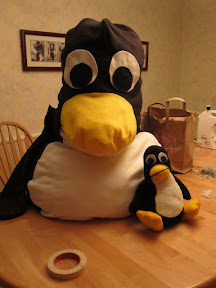 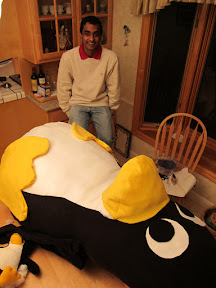 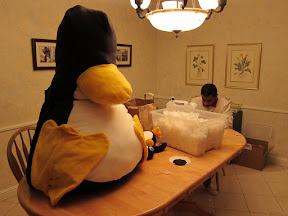 Tux takes shape for the first time! We perform a test stuffing to make sure there are no major problems. The derrière is just pinned on for the purposes of this test. Since Tux has some shape now we determine the final placement and alignment of the wings, feet, and eyes, and those pieces are pinned on. 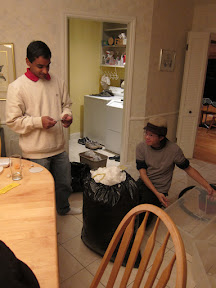 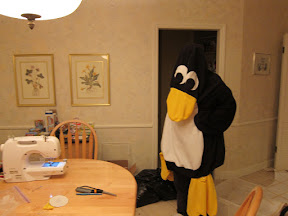 We remove the stuffing so we can finish sewing on all the appendages. Even more stuffing is prepared since Tux eventually needs to be stuffed at a much higher density than was needed for the test. 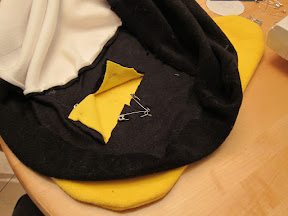 The feet, wings, and eyes are sewn on. For the feet and wings, we cut an opening to connect it to the body, and sew around the opening. This enables these pieces to be stuffed along with the rest of the body, later. It also has the effect of putting the seams on the inside. The pieces are pinned together to ensure they remain aligned correctly when sewn together. 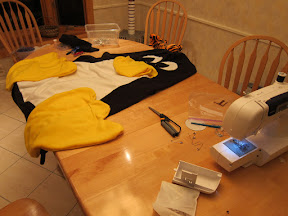 Tux's body is now completely sewn together with the exception of the derrière. We have greatly improved our technique since completing Original Tux. Up to this point, all stitches have been completed by sewing machine and are on the interior. (Original Tux had numerous hand-sewn parts and stitches visible on the outside. However, the fact that Giant Tux is giant does make it easier to use the sewing machine for more stitches.) 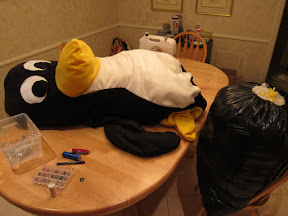 The last piece, the derrière, is partially sewn in and Tux is re-stuffed. 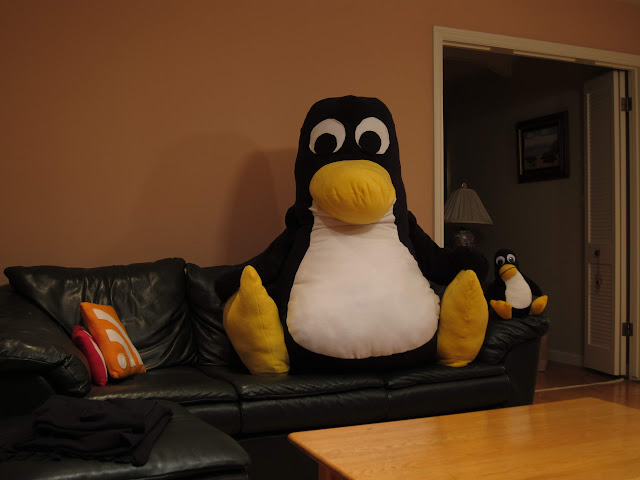 Giant Tux and Original Tux for comparison. Giant Tux fortunately does not require internal supports (skeleton or other reinforcement), but a Tux that is any larger probably would.

Here are some things we wish we had known when we started. Some of this information might be useful if you want to make a Plush Tux or a Giant Plush Tux.

This text and the accompanying photos are licensed under a Creative Commons Attribution-NonCommercial-ShareAlike 3.0 Unported License.